Week 7 of the college football season is highlighted by the SEC showdown between Alabama and Georgia. Our experts make their picks on Top 25 games.

Alabama and Georgia played in three of the memorable college football games during the last decade. None of those matchups, however, came during the regular season. This week’s meeting of the No. 2 Crimson Tide and No. 3 Bulldogs will be just the second since 2008 to occur outside of the the SEC championship game or College Football Playoff.

The game in 2015, like the three others in the 2010s, were all wins by Alabama, leaving Georgia fans to wonder if this is finally the year the Bulldogs can get past their neighbor to the west.

Much of those hopes rest on a new-look offense led by unlikely starting Stetson Bennett. It’s ability to keep pace with the Crimson Tide will be critical to reversing recent history. Added to the subplot this year is the anticipated absence of Crimson Tide coach Nick Saban, who announced Wednesday he had tested positive for COVID-19. 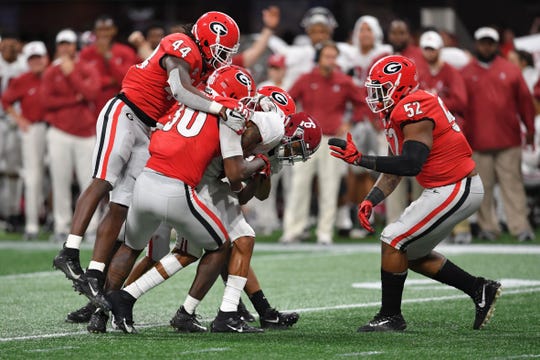 In other action among Top 25 teams this week – the last before the Big Ten starts its season – there are some under-the-radar matchups that could prove unsettling to playoff conteders.

No. 1 Clemson travels to Georgia Tech. With the Yellow Jackets among the more improved teams, the Tigers need to avoid a letdown after its big win against Miami. No. 11 Texas A&M, riding high after beating Florida, has similar concerns at Mississippi State. No. 6 North Carolina also goes on the road in the ACC against Florida State.