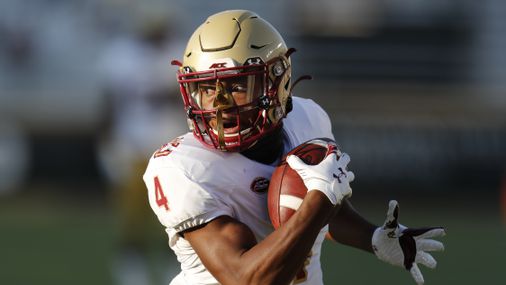 When Flowers named the receivers he wanted to model himself after, the only one was Brown.

One of the benefits of the coaching staff assembled by Eagles’ first-year coach Jeff Hafley is its wealth of NFL experience. Their relationships make it easy to play six degrees of separation.

Early on, Flowers mentioned to offensive coordinator Frank Cignetti how much he studied Brown. Cignetti, who had NFL runs with the Rams, Giants, and Packers, happened to mention it to former Giants quarterback Geno Smith. Smith happened to be spending the quarantine working out with Brown.

Those workouts happened to be in Miami — a relatively short drive from Flowers.

Before Flowers knew it, he was running routes with the receiver he’d been dissecting for years.

“It’s just me Gino and AB working out on a golf course,” Flowers said.

Flowers was able to see Brown’s skill set up close. Brown broke down some of the intricacies of route running and catching deep balls. Flowers soaked it in.

One detail Flowers took with him was catching deep balls over his outside shoulder and taking off. He flashed it last week in Boston College’s 31-30 win over Pitt when he raced up the middle of the field past Panthers defensive back Jason Pinnock, hauled in a pass over his left shoulder, and sped off the other way for a 77-yard touchdown.

He did it without thinking.

In Hafley’s first season, BC has transformed into one of the best passing teams in the Atlantic Coast Conference. Flowers has been one of the most dangerous weapons in the Eagles air attack.

As a freshman a year ago, Flowers caught 22 passes for 341 yards in an offense that relied heavily on the run with second-round draft pick A.J. Dillon in the backfield. This season, Flowers reaped the benefits of a more open attack. He already has 21 catches for 405 yards and four touchdowns.

Hafley knew it too. The first time he realized how dynamic Flowers could be was in a 1-on-1 drill.

“He goes right up in there, and I saw him release off the line and drop his hips and catch a comeback,” Hafley said. “I was like ‘Oh my gosh, this kid has got a live body.’ The way he’s twitched up and can move laterally, and accelerate, and how quickly he can gain ground, and then how quickly he can shut it down, that’s when I was like, ‘This kid is a receiver, and this kid has a chance to play.’”

Defensive back Josh DeBerry came in with Flowers in 2019 and saw the same things.

“He’s an elite receiver, and I believe he’s one of the best receivers in all of college football,” DeBerry said. “We go out every day and practice and compete. And we’ve been competing since freshman year, every day. So I mean, he’s definitely gotten a lot better, and he’s still getting better.

“What makes him great, he’s a he’s a complete receiver. He’ll get you on screens and he’ll go deep and he’ll take the top off. His route running is up there, too. Like I said, he’s one of the best receivers in all the college football.”

“I’m blessed to be able to do that two times,” Flowers said. “I just want to keep it going and let the other receivers [around the country] know that I’m here too. BC’s got receivers too, not just people who can run the ball.”

Flowers has bigger goals in mind. He was added this week to the Biletnikoff Award watch list and sees it as an attainable goal.

“I want to try to run for the Biletnikoff,” he said. “I want to be there [as] one of the best receivers in the country.”

Hafley said the best way to get there is for Flowers to focus less on the numbers and more on the process.

“Whether you’re a wide receiver, a quarterback, or a running back, you can’t go into every game thinking you’re going to get 180 [yards],” Hafley said. “You do the best you can, you prepare like you need to. That’s the same message to him. The great ones that I’ve been around, they have a mindset to go practice and get better every day.

“Zay is a really good player, if he has that mindset he will become a special player. Every day I have to get better, and so does Zay. We all have that attitude, we’ll all continue to take small steps and do better, and continue to be a better football team.”

If the big plays and big numbers keep coming, Flowers said, so be it.

Julian Benbow can be reached at julian.benbow@globe.com.