The rule wasn’t easy to impose on the limited-capacity crowd of 24,709. Even though A&M cadets got the message and covered their faces, many other sections of the stadium did not as they shouted and cheered during the Aggies’ 41-38 upset win against the Gators.

“Officially, 41 were escorted out of the stadium for refusing to adhere to face covering policy,” A&M spokesman Alan Cannon told USA TODAY.

This is all part of college football’s problem with combating the COVID-19 pandemic, according to public health experts. There are different rules and levels of enforcement for different leagues and schools, sometimes even within a single stadium at a single game. 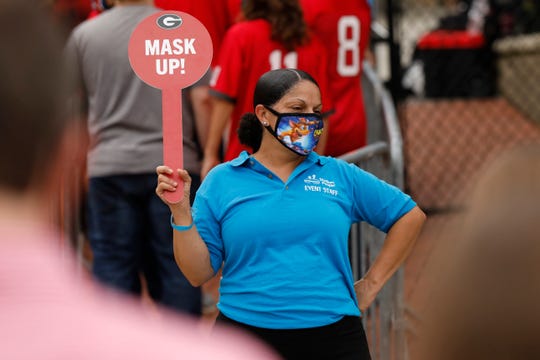 Security reminds fans to mask up before entering Sanford Stadium before the start of the Georgia-Tennessee game Oct. 13 in Athens, Ga. (Photo: Joshua L. Jones, AP)

More: Why Mike Leach, Mississippi State are at a crossroads before Texas A&M game

Such a scattershot strategy has increased the risk for a virus outbreak from a sports event, they said. Even if it hasn’t happened that we know of in the USA, they say it could be just a matter of time, especially after virus flare-ups at several colleges and a superspreader soccer event in February that hammered Italy.

“It’s important to note not every sporting event would turn into a superspreader,” said Zachary Binney, epidemiologist at Oxford College of Emory University.

It’s a little like Russian roulette. It’s possible to attend a large gathering with lax mask enforcement and not have a noticeable outbreak afterward. That doesn’t mean it can’t happen the next time you try it.

“No, it’s evidence you rolled the dice and got lucky,” Binney said. “If you keep doing even moderately risky things again and again and again, you’re going to get burned. It’s like driving down the highway without a seat belt. Yeah, any single time you’ll likely get away with it, but it’s not a good life policy.”

Some schools and leagues have taken note. Some still miss the point even after COVID-19 has claimed more than 216,000 lives in the USA.

Scientists are scrambling to learn about the unknown risks and longer-term effects of the virus, including among young people who might not be physically affected by it immediately.

In August, Harvard epidemiologist Michael Mina predicted that allowing fans at stadiums “would be a disaster.”

Since then, the range of risk-taking in college stadiums varies from cautious to cavalier even as COVID-19 cases surged in 41 states and flu season soon is likely to add to the misery.

Some avoid the risk

Some Power Five teams and leagues aren’t risking it and are subject to varying local public health restrictions. The Big Ten and Pac-12 conferences said they will not have fans in the stadium when they begin play Oct. 24 and Nov. 6. Schools in two other Power Five conferences – the Southeastern and Big 12 – allow different degrees of limited attendance, including Vanderbilt, which has allowed up to 2,000 students, with masks required.

In the other Power Five league, the Atlantic Coast Conference, four of its 2020 15 members have not allowed fans. 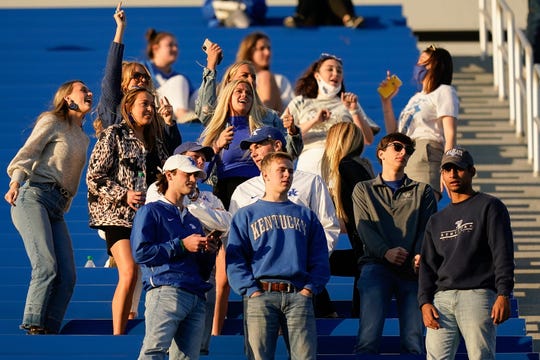 Kentucky fans cheer mostly without masks during the second half of a college football game against Mississippi on Oct. 13 in Lexington, Ky. (Photo: Bryan Woolston, AP)

Some wanted to pack the Swamp

One coach said he wanted giant crowds again despite the risk. After his team lost at A&M on Oct. 10, Florida coach Dan Mullen seemed jealous of the Aggies’ full-throated home crowd and said he hoped his university administration “decides to let us pack the Swamp for LSU next week.” By that, he meant having a full home stadium crowd of about 90,000 for the LSU-Florida game Saturday.

Four days later, that game was postponed because of an outbreak of positive tests among Florida football players. Florida athletics director Scott Stricklin said Wednesday there was suspicion that the outbreak stemmed from the trip to A&M, but he doubted it came from fans. Regarding Mullen’s desire to pack the stadium, Stricklin said, “Coaches sometimes say things that are outside of their area of expertise.”

Capacity at Florida’s home games has been capped at about 17,000 this year.

Not mandatory in some places

Some have struggled to keep fans masked and grouped apart. At Georgia’s home game against Auburn on Oct. 3, packs of spectators didn’t wear masks as they cheered in close proximity. Asked about it afterward, Georgia athletics spokesman Claude Felton said that all must have a mask when they enter the stadium and move around inside it, according to school and league policy.

“Masks are not mandatory while in their designated seating location,” he told USA TODAY in an email.

Keeping fans within these areas can be hard to enforce.

Clearing the area by force if necessary

Another school showed how serious it could be about mask enforcement at football games. At SMU in Dallas on Oct. 3, police cracked down on the student section after it failed to comply with requirements to maintain distance and wear masks.

“After numerous attempts by staff and security to get the students to comply with these safety requirements, it became necessary to clear the area,” the school said.

At Clemson, where attendance has been capped at 19,000, school officials said they have been able to maintain clear distance between groups with spaced-out assigned seating, which has worked for some schools better than others. Clemson and Florida are among those that invested in placing designated seatbacks on bleachers to make it clear to all where fans should and shouldn’t be seated or standing.

“In this year, where resources are a bit of a mess, not everybody wants to make that investment,” Florida’s Stricklin said.

Clemson officials said reminders and education about the rules have helped prevent the need to eject anybody for not wearing masks as required in the stadium at all times except when eating or drinking.

“We haven’t had to resort to that,” Clemson athletics spokesman Jeff Kallin said.

Coaches have been in the spotlight for not wearing masks during games, largely because they’re often on camera. Some  have been fined for it in the NFL. Last week, the SEC  threatened fines and suspensions for coaches who don’t wear masks during games. Less visible fans in the stands are a bigger risk during the pandemic, if only because they are part of a bigger crowd that is more difficult to control and keep in socially distanced small groups.

By contrast, coaches and players are regularly tested for COVID-19, then isolated if they test positive to avoid further spread. They are generally confined to the same limited groups of people all week, including on game day.

Mina said, “There’s no reason not to wear a mask at a game.”

“Anytime you’re in a congregate setting like a game, even if you are not around other people right in your very, very, very direct vicinity, not wearing masks just starts to have sort of an eroding effect on what people are willing to do other times, too,” said Mina of  the Harvard T.H. Chan School of Public Health.

He said the lack of a consistent national plan makes the pandemic more difficult to overcome and the risk of being infected at a stadium will remain serious until the community spread rate gets so low that infection becomes unlikely. Even shouting with a mask on during a game can spread the virus, depending on the quality of the mask.

“To get spectators back in the stands … we need to stop these outbreaks; we need to have a national plan to get control of this virus,” Mina said. “Until we do that, we can’t  realistically open up stadiums on a regular basis without serious concern of them each becoming superspreading events. Is it worth it to open up an NFL stadium if there’s a massive superspreading event and three people die as a result of the game? I don’t really think that’s worth it.”