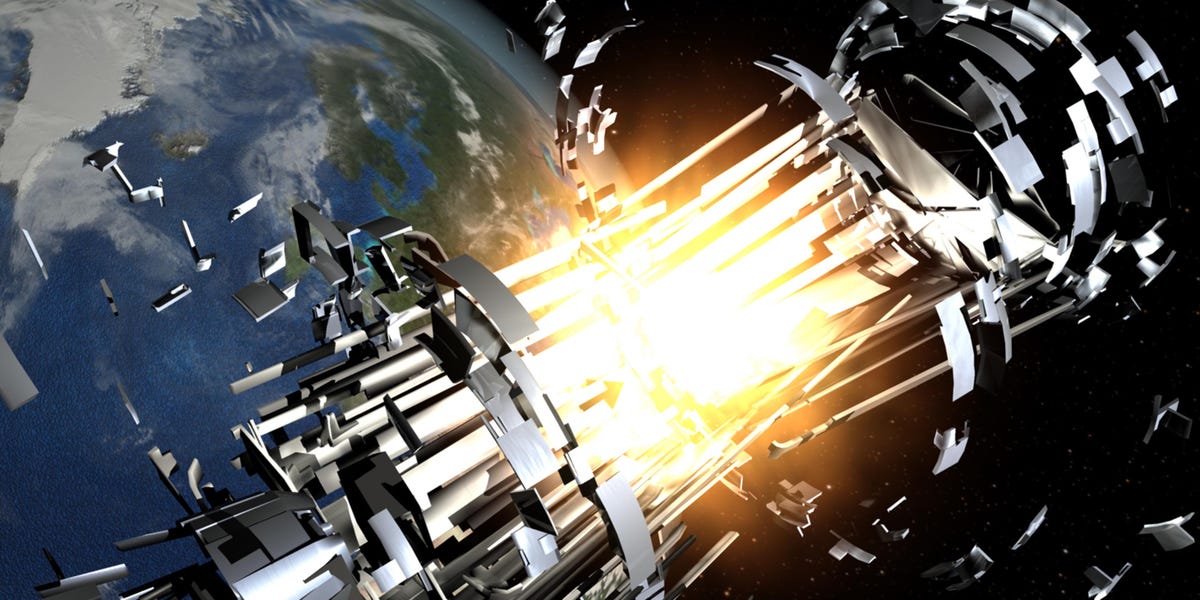 A dead Soviet satellite and a discarded Chinese rocket body are speeding toward each other in space and could crash catastrophically Thursday night.

LeoLabs, a company that uses radar to track satellites and debris in space, said on Tuesday that it was monitoring a “very high-risk” conjunction — an intersection in the two objects’ orbits around Earth. The company has used its radar arrays to observe each of the two objects as they pass overhead three or four times per day since Friday.

On Wednesday, when the estimated miss distance was just 12 meters (19 feet), LeoLabs calculated a 10% chance that the objects would collide. The company has not since offered an update to that probability number.

The chances of a collision can change — and usually decrease — drastically within 24 hours of a conjunction.

A 10% chance may seem low, but NASA routinely moves the International Space Station when the orbiting laboratory faces just a 0.001% (1-in-100,000) chance or greater of colliding with an object.

Since the Soviet satellite and Chinese rocket body are both defunct, nobody can move them out of each other’s way. If they do collide, an explosion roughly equivalent to detonating 14 metric tons of TNT will send bits of debris rocketing in all directions, according to astronomer Jonathan McDowell.

Experts at The Aerospace Corporation calculated much lower odds of collision: just 1 in 23 billion as of Thursday morning, with the objects projected to miss each other by about 70 meters (230 feet).

“I don’t mean to throw any shade whatsoever on [LeoLabs’] process or their sensors or anything else,” Ted Muelhaupt, who oversees The Aerospace Corporation’s space-debris analysis, told Business Insider. “But the sensors, the data we have access to says we’re pretty confident [the satellites] are not going to hit.”

A collision would probably not pose a danger to anybody on Earth, since the satellites are 991 kilometers (616 miles) above the ground and are set to cross paths above Antarctica’s Weddell Sea. But the debris the crash would create could cause major problems in space.

“If this turns into a collision, it’s probably thousands to tens of thousands of new pieces of debris that is going to cause a headache for any satellite that’s going out into upper low-Earth orbit, or even beyond,” Dan Ceperley, the CEO of LeoLabs, told Business Insider. “It’s maybe a much bigger problem than a lot of people realize.”

Nearly 130 million bits of space junk currently surround Earth, from abandoned satellites, spacecraft that broke apart, and other missions. That debris travels at roughly 10 times the speed of a bullet, which is fast enough to inflict disastrous damage to vital equipment, no matter how small the pieces.

Such a hit could kill astronauts on a spacecraft.

Collisions between pieces of space junk make the problem worse since they fragment objects into smaller pieces.

The first was a Chinese test of an anti-satellite missile, in which China blew up one of its own weather satellites. Then two years later, an American spacecraft accidentally collided with a Russian one.

“Because of that, now there’s sort of a debris belt,” Ceperley said.

India conducted its own anti-satellite missile test in 2019, and that explosion created an estimated 6,500 pieces of debris larger than an eraser.

The satellite that India blew up had a mass of less than one metric ton.

Combined, the Soviet satellite and the Chinese rocket body currently careening toward each other have a mass of nearly three metric tons (2,800 kilograms). Given those large sizes, Thursday’s possible conjunction has the potential to create a significant cloud of dangerous debris.

This isn’t the first time LeoLabs has alerted the world to the possibility of a high-risk satellite conjunction. In January, the company calculated a possible collision between a dead space telescope and an old US Air Force satellite.

The objects did not crash, but Ceperley said that because both satellites “were decommissioned, basically nobody was keeping a close eye on them.”

The US Air Force, which tracks satellites for the government, did not notify NASA about that potential collision, the space agency told Business Insider at the time.

Experts’ warnings about space junk have only grown more urgent since that near miss.

“We are seeing recently a decided uptick in the number of conjunctions,” Dan Oltrogge, an astrodynamicist who researches orbital debris at Analytical Graphics, Inc, told Business Insider.

Oltrogge uses a software system that has been collecting and assessing conjunction data for the last 15 years. The recent uptick in orbital encounters, he added, “looks to be very well aligned with the new large-constellation spacecraft that have been launched.”

The large constellations he’s referring to are fleets of internet satellites that companies like SpaceX, Amazon, and OneWeb are planning to launch. In total, the companies plan to launch more than 100,000 satellites by the end of the decade. SpaceX has already rocketed nearly 800 new satellites into Earth’s orbit since May 2019.

“The space-debris community is constantly warning about all these close approaches, and we’re not wrong or lying about this,” Muelhaupt said. “Any given one of them is a low-probability event, because space is still really big. But when you take these objects and you mix them up, sooner or later you’re going to see a payoff. By most of our models we’re overdue for another major collision.”

A debris disaster could cut off our access to space

If the space-junk problem were to get extreme, a chain of collisions could spiral out of control and surround Earth in an impassable field of debris. This possibility is known as a Kessler event, after Donald J. Kessler, who worked for NASA’s Johnson Space Center and calculated in a 1978 paper that it could take hundreds of years for such debris to clear up enough to make spaceflight safe again.

“It is a long-term effect that takes place over decades and centuries,” Muelhaupt told Business Insider in January. “Anything that makes a lot of debris is going to increase that risk.”

The sheer number of objects in Earth’s orbit may already be having a Kessler-like effect — a risk that Rocket Lab CEO Peter Beck described last week.

“This has a massive impact on the launch side,” he told CNN Business, adding that rockets “have to try and weave their way up in between these [satellite] constellations.”

This is a developing story. Please check back for updates.