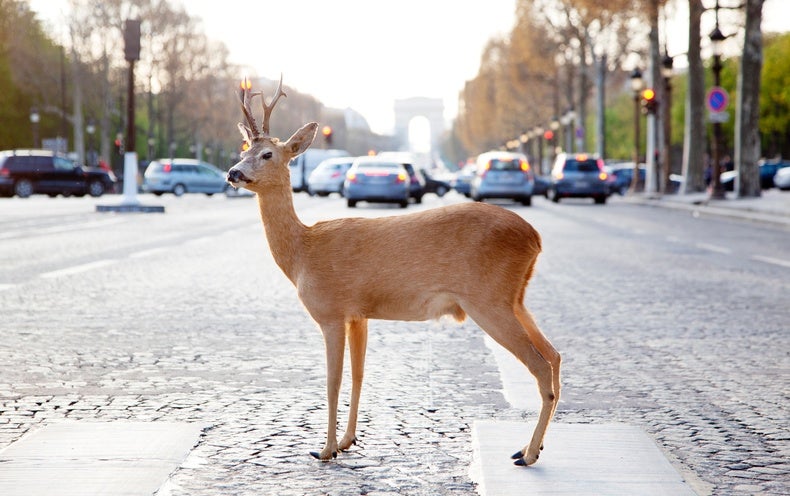 Wild animals are equipped with a variety of techniques to avoid becoming lunch for a bigger, toothier animal. The most well-known methods include the classic “fight” and “flight,” as well as “freeze”. A team of researchers wondered how proximity to people might impact those survival strategies.

“We often see that animals are more tolerant around us in urban areas but we don’t really know why.”

“Is it a filtering process where only the tolerant animals are there? Is it individual plasticity, meaning individuals change their fear of us, and that leads to tolerance? Or can there be an evolutionary dynamic occurring?”

To find out, Blumstein and colleagues combined information from 173 studies of more than 100 species, including mammals, birds, reptiles, fish, and even mollusks. Turns out that regardless of evolutionary lineage, the animals react in a similar way to life among humans: they lose their antipredator traits. That pattern is especially pronounced for herbivores and for social species.

This behavioral change is perhaps unsurprising when it’s intentional, the result of domestication and a controlled breeding paradigm. But it turns out that urbanization alone results in a similar change, though much more slowly. Around three times more slowly. The results are in the journal PLOS Biology. [Benjamin Geffroy et al. Evolutionary dynamics in the Anthropocene: Life history and intensity of human contact shape antipredator responses]

“The main point is we’re essentially domesticating animals by urbanization, we’re selecting for the same sorts of traits that we would if we were actually trying to domesticate them.”

If the urbanization process helps animals better coexist with people, it could be to their benefit. But if it makes them more vulnerable to their non-human predators, it could be a real problem.

Either way, these results mean that city living exerts enough of an influence on wild animals that evolutionary processes kick in. Those reductions in antipredator traits become encoded in their genes.

“We’re changing the population genetics and changing genetic variation, we are reducing, we are eliminating variation. And if variation is a good thing, and is a target of conservation, then that’s something to be concerned with.”

What the researchers now wonder is whether the mere presence of tourists in less urbanized areas can instigate similar changes in wild animals. If so, serious questions exist for the notion of ethical, welfare-oriented ecotourism. If we wish to help animals retain their antipredator defenses, the researchers say, we might have to intentionally expose animals to predators, or at least to predator-related cues.

“It’s just yet one other way that we’re changing the world around us.”

(The above text is a transcript of this podcast)