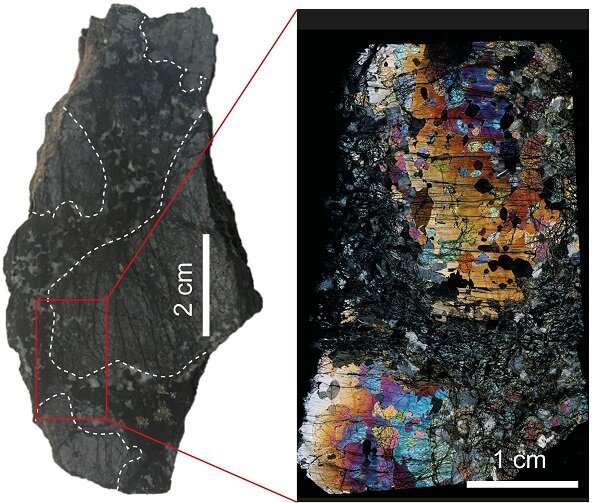 Natural diamonds can form through low pressure and temperature geological processes on Earth, as stated in an article published in the journal Geochemical Perspectives Letters. The newfound mechanism, far from the classic view on the formation of diamonds under ultra-high pressure, is confirmed in the study, which draws on the participation of experts from the Mineral Resources Research Group of the Faculty of Earth Sciences of the University of Barcelona (UB).

Other participants in the study are the experts from the Institute of Nanoscience and Nanotechnology of the UB (IN2UB), the University of Granada (UGR), the Andalusian Institute of Earth Sciences (IACT), the Institute of Ceramics and Glass (CSIC), and the National Autonomous University of Mexico (UNAM). The study has been carried out within the framework of the doctoral thesis carried out by researcher Núria Pujol-Solà (UB), first author of the article, under the supervision of researchers Joaquín A. Proenza (UB) and Antonio García-Casco (UGR).

Diamond: The toughest of all minerals

A symbol of luxury and richness, the diamond (from the Greek αδ?μας, “invincible”) is the most valuable gem and the toughest mineral (value of 10 in Mohs scale). It is formed by chemically pure carbon, and according to the traditional hypothesis, it crystalizes the cubic system under ultra-high-pressure conditions at great depths in the Earth’s mantle.

The study confirms for the first time the formation of the natural diamond under low pressures in oceanic rocks in the Moa-Baracoa Ophiolitic Massif, in Cuba. This great geological structure is in the north-eastern side of the island and is formed by ophiolites, representative rocks of the Oceanic lithosphere.

These oceanic rocks were deposited on the continental edge of North America during the collision of the Caribbean oceanic island arch, between 70 and 40 million years ago. “During its formation in the abysmal marine seafloors, in the cretaceous period—about 120 million years ago—these oceanic rocks underwent mineral alterations due to marine water infiltrations, a process that led to small fluid inclusions inside the olivine, the most common mineral in this kind of rock,” notes Joaquín A. Proenza, member of the Department of Mineralogy, Petrology and Applied Geology at the UB and principal researcher of the project in which the article appears, and Antonio García-Casco, from the Department of Mineralogy and Petrology of the UGR.

“These fluid inclusions contain nanodiamonds of about 200 and 300 nanometres, apart from serpentine, magnetite, metallic silicon and pure methane. All these materials have formed under low pressure (

“Therefore, this is the first description of ophiolitic diamond formed under low pressure and temperature, whose formation under natural processes does not bear any doubts,” they highlight.

It is notable to bear in mind that the team published, in 2019, a first description of the formation of ophiolitic diamonds under low pressure conditions (Geology), a study carried out as part of the doctoral thesis by the UB researcher Júlia Farré de Pablo, supervised by Joaquín A. Proenza and the UGR professor José María González Jiménez. This study was highly debated among the members of the international scientific community.

In the current article in Geochemical Perspectives Letters, a journal of the European Association of Geochemistry, the experts detected the nanodiamonds in small fluid inclusions under the surface of the samples. The finding was carried out by using confocal Raman maps and using focused ion beams (FIB), combined with transmission electron microscopy (FIB-TEM). This is how they could confirm the presence of the diamond in the depth of the sample, and therefore, the formation of a natural diamond under low pressure in exhumed oceanic rocks. The Scientific and Technological Centres of the UB (CCiTUB) have taken part in this study, among other infrastructures supporting the country.

In this case, the study focuses its debate on the validity of some geodynamic models that, based on the presence of ophiolite diamonds, imply circulation in the mantle and large-scale lithosphere recycling. For instance, the ophiolitic diamond was thought to reflect the passing of ophiolitic rocks over the deep earth’s mantle up to the transition area (210-660 km deep) before settling into a normal ophiolite formed under low pressure (~10 km deep).

According to the experts, the low state of oxidation in this geological system would explain the formation of nano-diamonds instead of graphite, which would be expected under physical and chemical formation conditions of fluid inclusions.