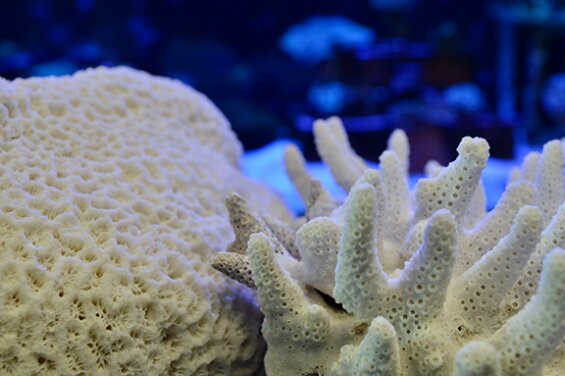 Researchers from The University of Hong Kong’s School of Biological Sciences and The Swire Institute of Marine Science, have for the first time investigated the historical presence of coral communities in the Greater Bay Area, revealing a catastrophic range collapse and loss of diversity that occurred in the last several decades.

The research, published in the prestigious journal Science Advances, looks at fossil corals collected from over 11 sites around Hong Kong, and creates the first palaeoecological baseline for coral communities in the Greater Bay Area. Led by Ph.D. candidate and National Geographic Explorer Jonathan Cybulski, the team revealed what coral genera were present in the past well before major human impacts, and these include: Acropora, Montipora, Turbinaria, Psammacora, Pavona, Hydnophora, Porites, Platygyra, Goniopora and Faviids.

Every fossil tells a story

“The data we collect helps us to create a sort of fossil time machine,” said Cybulski. “As corals grow naturally, parts of them will break off and fall to seafloor becoming a part of the sediment. Over time, many different layers of these coral skeletons will stack on top of one another. With a bit of effort we can core through the sediments and collect the different layers and reveal what coral communities were like through time,” Cybulski explained. By using this method, the team was able to collect skeletons from over 5,000 years ago, which they determined thanks to radiocarbon dating by collaborator Dr. Yusuke Yokoyama of the Atmosphere and Ocean Research Institute at The University of Tokyo.

When the team compared their fossil data to a modern-day dataset collected by collaborators at Baptist University—Dr. Jian Wen QIU and Dr. James XIE, several striking conclusions were revealed. First, there has been about a 40% decrease in the number of different corals living in Southern Hong Kong waters. Second, the greatest loss was of the ecologically important yet highly-sensitive staghorn corals (Acropora), which now only lives in an area about 50% smaller than its historic range. Finally, the greatest impact and losses of corals occurred in waters that are closest to the Pearl River Estuary in the southwest and Tolo Harbor in the Northeast. Based on the data, the teams best guess for the timing of this coral community change is conservatively within the last century, but likely within the past few decades. The overall conclusion: poor water quality driven by increased development and lack of proper treatment is presently the regions greatest threat to the survival of corals.

“This trend we saw of a diversity decline and the loss of Acropora is consistent with other research in different areas of the world,” Cybulski continues: “It’s particularly bad news for this region, as Acropora represents the only type of coral that is complex, and creates physical space that promotes greater biodiversity. The loss of this coral is similar to losing all the big trees in a forest.” However, similar to trees in a forest, Cybulski continued by saying there is hope for Hong Kong’s corals through conservation efforts.

Indeed, this historical research has already played a critical role in protecting and restoring corals locally. In July earlier this year, Ph.D. Candidate Ms Vriko YU, also of the Baker Lab at HKU, pioneered a coral restoration project in Hoi Ha Wan Marine Park. This project aims to restore and better understand what it will take to save Hong Kong corals, and was made possible due to the water quality improvements in the bay by the local government.

Using Cybulski’s historical data to infer the appropriate steps needed, the team is now returning corals such as Acropora that previously thrived in Hoi Ha, back to their proper home. To date, 100% of the reintroduced coral have survived. Furthermore, the team has documented several coral associated invertabrates at the site, showing that this restored habitat is indeed increasing biodiversity. The team feels this multi-faceted model—historical research that identifies major stress targets for local improvements—can be used by other researchers who hope to give corals their greatest chance for future survival.

Citation:
Researchers reveal the historic range and diversity of corals in the Greater Bay area for the last 5,000 years (2020, October 15)
retrieved 15 October 2020
from https://phys.org/news/2020-10-hong-kong-coral-reef-paradise.html