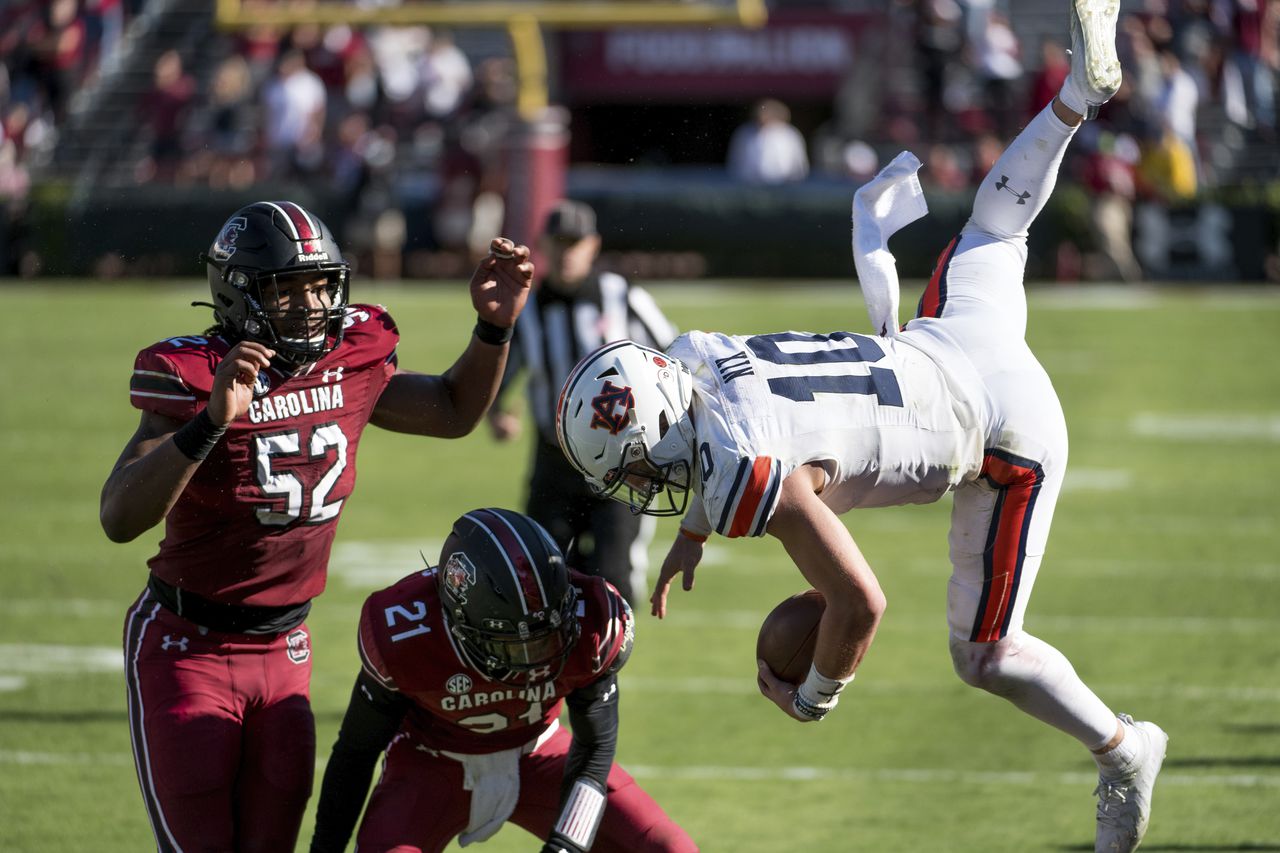 Kevin Harris had two touchdown runs and South Carolina turned three interceptions into points to beat No. 15 Auburn for the first time in 87 years, a 30-22 victory on Saturday.

The Tigers (2-2 Southeastern Conference) had won eight in a row in the series and jumped out to a 9-0 lead in the opening 10 minutes. But Bo Nix threw three interceptions and the host Gamecocks (2-2) cashed in each time to win consecutive games for the first time in more than a year.

Shi Smith had eight catches, including a 10-yard TD grab midway through the third quarter that put South Carolina ahead for good, 20-19.

Auburn was driving on its following series when Nix threw his third interception — and second to cornerback Jaycee Horn who brought the ball down the left sidelines to the Tigers 8. Harris was in the end zone a play later for a 27-19 lead and Auburn could not recover.

Trevor Lawrence brushed off his first interception of the season to pass for a career-high 404 yards and five touchdowns in Clemson’s romp over Georgia Tech.

Lawrence completed 24 of 33 passes. All of his scoring passes came in the Tigers’ dominant first half. Clemson led 52-7 at halftime and kept adding to the lead in the second, even with second- and third- (and maybe fourth-) stringers on the field.

Lawrence left the game after visiting Clemson’s first possession of the second half.

It was Lawrence’s first interception since Oct. 19, 2019 at Louisville. North Carolina State’s Russell Wilson set the ACC record with 379 consecutive passes without an interception from 2018-19.

Kelvin Joseph and Jami Davis returned interceptions for touchdowns in the first half and Kentucky shut out Tennessee in the second half.

It was Kentucky’s first victory in Neyland Stadium since 1984, the Wildcats’ largest margin of victory in Knoxville since 56-0 in 1893 and their most lopsided victory in the series since 1935.

After getting six interceptions and allowing only a safety against Mississippi State last week, Kentucky (2-2) picked off three passes against the Volunteers (2-2).

Joseph’s 41-yard touchdown and Davis’ 85-yard return — both off interceptions thrown by Jarrett Guarantano — helped put Kentucky up 17-0 in the second quarter.

With about 5 minutes left in the third quarter and trailing by 20, Tennessee went three-and-out for a second consecutive possession and was showered with boos from the sparse crowd of 22,519.

Will Mallory caught two of King’s scoring passes and the Hurricanes (4-1, 3-1 Atlantic Coast Conference) bounced back from a 42-17 loss at top-ranked Clemson last week.

The Panthers (3-3, 2-3) lost their third in a row and were without senior quarterback Kenny Pickett. He suffered an ankle injury against Boston College last week.

Dax Milne caught nine passes for 184 yards and three touchdowns to help BYU improve to 5-0 for the first time since 2008.

Down 12, Wilson found Milne for a 2-yard touchdown pass with 53 seconds remaining in the third. Wilson gave BYU the lead back with an 8-yard touchdown pass to Masen Wake with 10:35 left to make it 29-26 following a 2-point conversion pass from Wilson to Tyler Allgeier.

Brandon Crossley ended the first overtime possession with an interception and Chris Naggar made a 34-yard field goal to lift visiting SMU past Tulane.

After Tulane took a 31-27 lead early in the fourth quarter on Pratt’s 7-yard touchdown, the Mustangs pulled ahead 34-31 lead on Shane Buechele’s 10-yard pass to Danny Gray.

Buechele completed 23 of 37 passes for 384 yards and two touchdowns. He entered the game second nationally in passing yards.