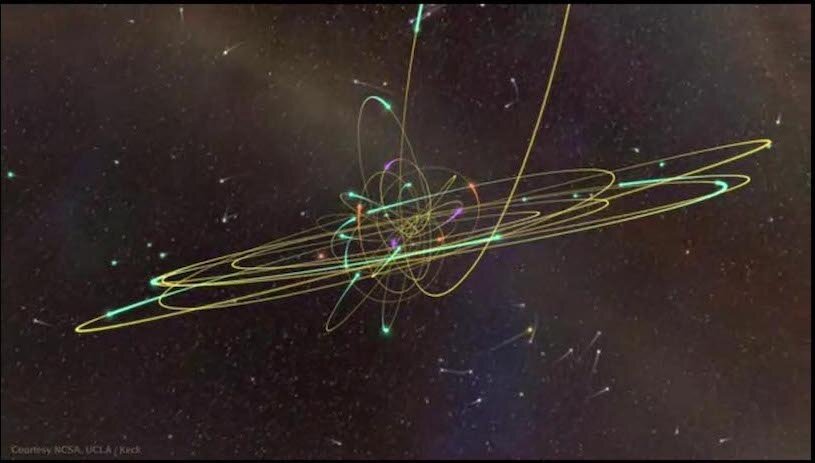 Once a black hole forms, its intense gravitational field produces a surface beyond which even light cannot escape, and it appears black to outsiders. All the details of the complex mix of matter and energy in its past are lost, leaving it so simple that it can be completely described by just three parameters: mass, spin, and electric charge. Astronomers can measure the masses of black holes in a relatively straightforward way by watching how matter moves in their vicinity (including other black holes) under the influence of their gravitational fields.

The charges of black holes are thought to be insignificant when positive and negative infalling charges are balanced in number. The spins of black holes are difficult to determine; typically they are determined by interpreting the X-ray emission from the hot inner edge of the accretion disk around the black hole. The spin is quantified by a number between zero and one, and black hole spins have been measured with results ranging from a few tenths to close to the one.

The Milky Way galaxy hosts a supermassive black hole (SMBH) at its center, Sagittarius A, with about four million solar-masses. At a distance of about twenty-seven thousand light-years, it is by far the closest such object to us, and even though it is not nearly as active or luminous as other supermassive galactic nuclei, its relative proximity provides astronomers with a unique opportunity to probe what happens close to the “edge” of a massive black hole. The Galactic Center SMBH is surrounded by a cluster of stars and clumps of faintly glowing material, and in recent years astronomers have been able to push tests of General Relativity to new limits by measuring and modeling the motions of these clumps as they swing around the SMBH. The spin of the black hole, however, has not been determined in any consistent fashion, but its value would help constrain models of possible jet activity.

CfA astronomers Giacomo Fragione and Avi Loeb realized that the spatial distribution of one group of cluster objects, the so-called S-stars, could be used to probe the spin. There are currently about forty known S-stars that orbit the SMBH in as little as 9.9 years, and recent analyses argue that collectively they lie in two nearly edge-on disks, with the stars in each disc rotating around the black hole but in opposite directions. The two astronomers realized that this unusual geometry could allow am estimate measurement of the spin. One of the more curious and non-intuitive predictions of relativity is that space is not only warped by the gravity of a massive body, it is also warped (though to a lesser degree) by the spinning of a body. This is the so-called “frame dragging effect,” a small and hard-to-measure phenomenon (which, however, been confirmed). The two astronomers show that in the case of SgrA, frame dragging will have an appreciable effect on the orbits of the S-stars in these disks. By assuming that the S-stars orbital planes are stable over time, they are able to show that the spin of the SMBH in the Milky Way must be less than about 0.1.

Measuring the spin of a black hole

More information:
Giacomo Fragione et al. An Upper Limit on the Spin of SgrA* Based on Stellar Orbits in Its Vicinity, The Astrophysical Journal (2020). DOI: 10.3847/2041-8213/abb9b4
Provided by
Harvard-Smithsonian Center for Astrophysics

Citation:
The spin of the supermassive black hole in the Milky Way (2020, October 15)
retrieved 15 October 2020
from https://phys.org/news/2020-10-supermassive-black-hole-milky.html