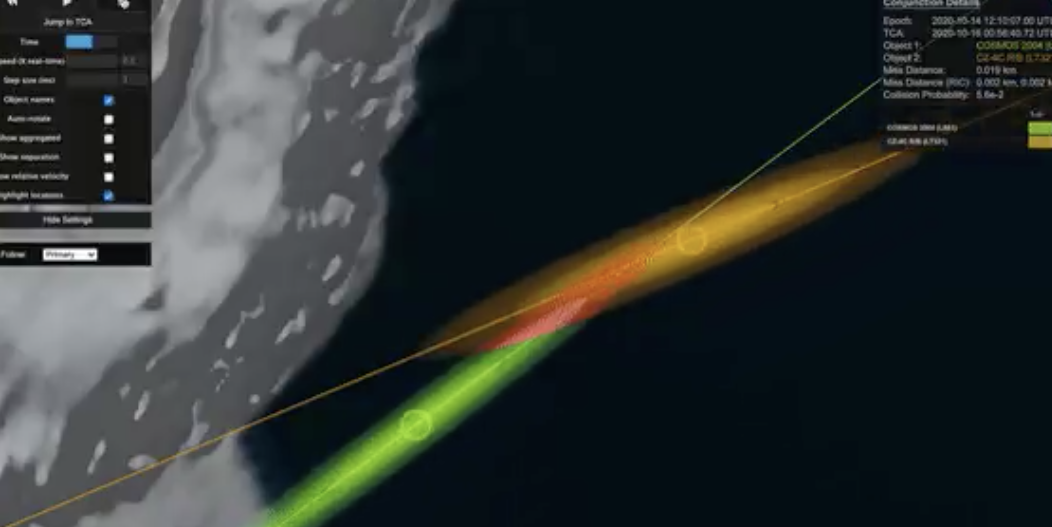 Update 10/16/20: Fortunately, it seems that the Soviet Parus 64 satellite and CZ-4C rocket stage whizzed by each other without incident. No additional debris was detected, according to a tweet from LeoLabs.

No indication of collision. 👍

CZ-4C R/B passed over LeoLabs Kiwi Space Radar 10 minutes after TCA. Our data shows only a single object as we’d hoped, with no signs of debris.

We will follow up in the coming days on Medium with a full in-depth risk assessment of this event!

On Tuesday, LeoLabs, a company that monitors the paths of space junk in low-Earth orbit, announced on Twitter it was tracking a potential conjunction—that’s space-speak for a mid-orbit crash—tonight between a defunct Soviet satellite and a discarded Chinese rocket stage.

We are monitoring a very high risk conjunction between two large defunct objects in LEO. Multiple data points show miss distance <25m and Pc between 1% and 20%. Combined mass of both objects is ~2,800kg.

“This is a potentially serious event. It is between 2 large objects and at high altitude, 991km,” former astronaut and LeoLabs co-founder Ed Lu tweeted. “If there is a collision there will be lots of debris which will remain in orbit for a long time.”

🌌 You love our badass universe. So do we. Let’s nerd out over it together.

The combined mass of the two objects, which are expected to zip past each other at a whopping relative velocity of about 32,900 miles per hour, is an estimated 6,170 pounds. LeoLabs has since updated its models … and things are looking grim.

According to the company’s latest calculations, the objects are expected to come within 80 feet of each other (±59 feet). The probability of a collision is greater than 10 percent. If the satellites collide, the impact could spread a network of debris throughout low-Earth Orbit.

One of the objects is Parus 64 (Kosmos 2004), a Soviet navigation satellite, which launched on February 22, 1989 and weighs around 1,700 pounds. (It also has a 55-foot-long gravity boom, according to Jonathan McDowell, an astronomer at the Harvard Smithsonian Center for Astrophyics, who tracks space junk.) The other is a Chinese-made CZ-4C rocket stage, which is about 2o feet long and is suspected to have launched in 2004.

LeoLabs noted the CZ-4C rocket stage will pass over one of the company’s New Zealand-based radars shortly after the expected close approach. This should provide enough data to reveal the fate of the two objects and detect any new debris.

This exact scenario is one that spaceflight experts have been warning about for decades. Earth is shrouded in a web of space junk, with pieces ranging in size from flecks of paint to spent rocket stages. The United States Space Surveillance Network is currently monitoring roughly 200,000 objects between 0.4 and 4 inches, 14,000 objects larger than 4 inches, and thousands of larger objects.

In 1978, NASA scientist Donald Kessler published a landmark paper on the potential impacts of space junk collisions in Earth’s orbit. He predicted a grim future in which a chain of collisions could send an impenetrable wave of debris out across low-Earth orbit, rendering the rest of the universe out of reach to humanity for decades.

These concerns have grown in recent years as companies like SpaceX’s Starlink, Kepler, and OneWeb draft plans to launch vast constellations of communications satellites into orbit. In a recent interview with CNN Business, RocketLab CEO Peter Beck said the ever-increasing amount of space junk is already impacting operations at the company. Satellite constellations are especially making it difficult for RocketLab to find a clear path to outer space, Beck said.

In September, the International Space Station (ISS) dodged a particularly scary collision. Russian cosmonauts Ivan Vagner and Anatoly Ivanishin, as well as NASA astronaut Chris Cassidy, huddled inside one of the Soyuz capsules attached to the ISS as a precaution in case the space station was compromised by the debris. NASA Administrator Jim Bridenstine expressed his frustration in a September 22 tweet following the space station’s near-miss.

The @Space_Station has maneuvered 3 times in 2020 to avoid debris. In the last 2 weeks, there have been 3 high concern potential conjunctions. Debris is getting worse! Time for Congress to provide @CommerceGov with the $15 mil requested by @POTUS for the Office of Space Commerce.

And then there’s the threat of bad actors who could potentially fire missiles at satellites in orbit. Both India and China have tested anti-satellite technology in recent years—much to the chagrin of the rest of the spaceflight community.

Monitoring and preventing the collision of space junk has become a high priority both for private space companies and legacy space agencies around the world. Fortunately, programs like the University of Surrey’s RemoveDEBRIS project and the U.S. Air Force are developing technology aimed to remove space junk from orbit. It’ll be a while before that tech gets off the ground, though.

Let’s hope it happens sooner rather than later.