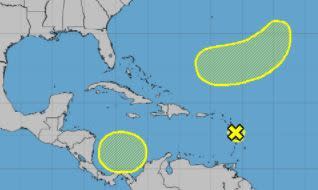 Tropical activity is expected to kick up in the Atlantic basin over the weekend and into next week, forecasters said.

The National Hurricane Center is watching for two disturbances to form. Each has been given a 20% chance of development in the next five days.

The first is expected to form this weekend several hundred miles southeast of Bermuda and is likely to travel west next week, on a path midway between Bermuda and the Lesser Antilles.

It is forecast to move over warm water creating favorable conditions for development, but it is likely to encounter wind shear by midweek, AccuWeather hurricane expert Dan Kottlowski said.

Also under observation is a broad area of low pressure that is forecast to move over the southwestern Caribbean early next week.

Its path is uncertain, but “there is a chance it could affect Cuba, the Bahamas and perhaps the Florida Peninsula either directly or indirectly during the fourth week of October,” Kottlowski said.

Because 2020 is a La Niña year, forecasters expect late-season storm activity to increase in October and possibly even carry into November.

Meanwhile, a third disturbance located near the far eastern boundary of the Caribbean Sea on Thursday is forecast to bring heavy rain to parts of the region in the next few days.

Rain is forecast for the southeastern Caribbean as the system passes over the Virgin Islands and Puerto Rico on Thursday and Haiti and the Dominican Republic on Friday. But, its odds of developing into a tropical system stood at 0% Thursday due to the presence of storm-shredding wind shear.

Remarkably, none of the storms that have made landfall in the continental U.S. this year have hit Florida. October storms often threaten Florida as they move north and then northeastward.

The next storm to form would be called Epsilon.