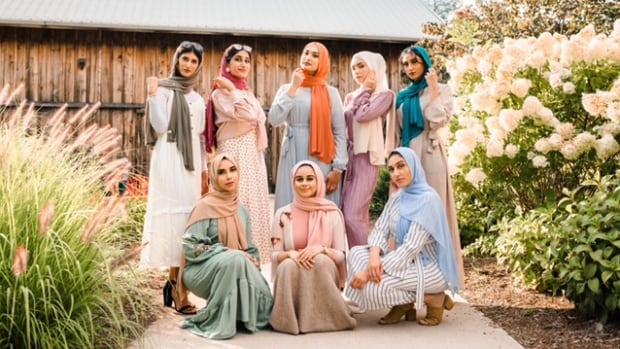 When Tamania Majeed first started wearing a hijab at 8 years old, she remembers alternating between the same two headscarves because it was hard to find any that she liked.

This was true for her as she grew up in Mississauga and also when she moved to Waterloo region to go to the University of Waterloo.

“Exploring the options I had was extremely frustrating, because there weren’t any,” she said.

“There’s rarely any [local] stores that cater to our needs in terms of what we want to wear or how we want to dress and that’s definitely something that a lot of Muslim women have recognized as a problem,” Majeed said.

The accounting and finance student had been mulling over the idea of starting her own business for two years. On Oct. 31, 2019, she launched Eight Stories of Modesty.

What motivated her, she said, is a lack of representation of Muslim women in the fashion industry across North America but also misconceptions about women who wear the head covering.

‘I want to build a community’

But it isn’t not just scarves that she’s selling. It’s also — as the business name implies — stories.

“I wanted a more meaningful interaction between the customer and myself,” Majeed explained.

Packaged inside a sleek black and brown box and nestled in the folds of scarf material is a card that bears a story written by a Muslim woman. Each time Majeed launches a collection, there are eight new scarves and eight new stories.

The first collection focused on womens’ individual experiences with the hijab, the second highlighted stories of courage and the third was about hope.

“I was always a very big storyteller growing up and I really value the things you can take away from others,” she explained. “I want to build a community for women that maybe they can be able to relate to one another … and then also give opportunity for everyone else to learn the experiences that Muslim women have firsthand.”

What sets her product apart from scarves at other women’s clothing stores, Majeed explained, is that the scarves are designed with Muslim women in mind.

“A lot of materials don’t look appealing on a head. It’s hard to style them, it’s hard to pin them around, sometimes they slip off. There’s certain things the material has to be for it to work as a headscarf,” she said.

Majeed sources her material from a supplier in Scarborough and hand picks the colour pallet and the fabrics for each collection.

“There’s more variety in terms of colour and materials and it’s also in one place,” she said.

Not a short-term project

The business is approaching it’s one year anniversary and Majeed said she’s been “very happy” with the response she’s received so far.

“A lot of girls were like, ‘Wow, reading this it really did hit home for me, I was able to relate to this person in this way,'” she explained. “That’s technically what I set out to do. And I’ve done it.”

Majeed said she was introduced to pitch competitions at university and that taught her how to talk to people about Eight Stories of Modesty. She won one of the university’s Concept $5K grants and she was finalist in The Problem Lab’s pitch competition, too.

The investment has helped her develop a website, launch her third collection and she’s now in the process of hiring some team members.

“That’s been what’s super difficult for me, finding people that can share the vision and be great co-founders,” she said.

Right now, Majeed has been handling supply, packaging, branding, marketing and sales all on her own.

She also someday hopes to move beyond selling scarves and into selling modest clothing.

“I definitely didn’t start this as a short-term project,” she said.