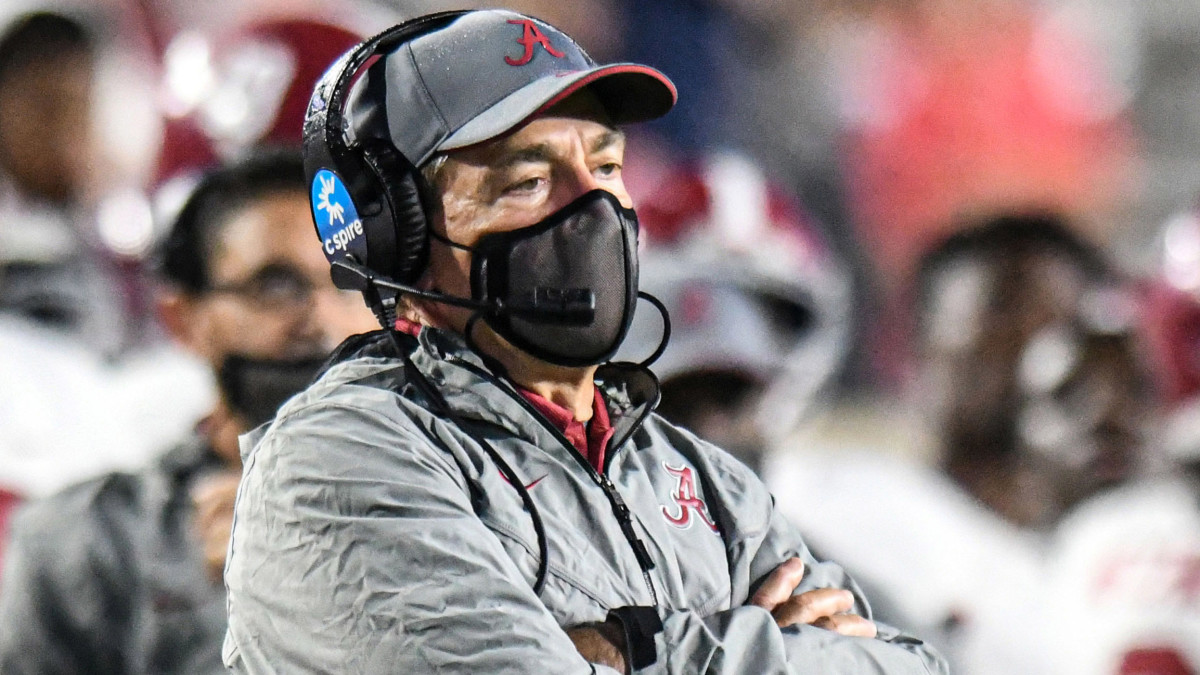 Nick Saban follows all of the protocols.

The Alabama coach was rarely, if ever, spotted on the sidelines without a mask. He kept socially distant, at least in public, and he says he washed his hands often. He appeared in social media advertisements encouraging the public to follow CDC guidelines, and he preached to his players to keep their distance from everyone—you never know, he told them, who could be infected.

In fact, Alabama is one of the few football programs currently playing to have administered daily testing of its staff and players. That includes Saban.

And then, on Wednesday afternoon at 1 p.m., despite all of the precautions, he tested positive for the coronavirus.

“I was very surprised by this,” Saban told reporters on a Zoom call Wednesday, hours after his test result.

Saban is, for now, asymptomatic. He feels fine, he says, and will continue to work from home while awaiting a second test result to potentially confirm the first. With the test confirmation, the 68-year-old will miss what is the biggest game, to this point, of the college football season, when No. 3 Georgia visits No. 2 Alabama on Saturday in Tuscaloosa. He will not be allowed to communicate with players or coaches. Offensive coordinator Steve Sarkisian, a former head coach himself, is expected to fill in.

Meanwhile, the diagnosis of college football’s most successful active head coach is the latest in a string of COVID-related issues sustained this week by the country’s most high-profile conference. Florida and Vanderbilt have, at least, a combined 60 players out for virus reasons, resulting in postponements of their games this weekend against LSU and Missouri, respectively. Ole Miss is battling an outbreak as well, coach Lane Kiffin told reporters Wednesday.

Across the country, at least 29 games (about 10% of those played) have been postponed or canceled because of a virus that has killed more than 200,000 people in America and nearly 1.1 million worldwide. Saban became the seventh FBS head coach to reveal that he’s tested positive, and his diagnosis sends a chilling reminder of what medical experts have cautioned throughout the summer.

“At the end of the day, the virus doesn’t care if you want to play football,” says Shane Speights, dean of the NYIT medical school at Arkansas State, who oversees virus testing at ASU.

While awaiting the second test result, Alabama is exploring just how it happened. Saban suggested during an interview with reporters that he could have contracted it while traveling to the Crimson Tide’s road trip, noting that he left the “bubble” that the program has created in Tuscaloosa.

“As soon as you travel, you get exposed to a lot more people,” Saban said. “I wear a mask on the sideline, on the plane. Nobody really knows how this occurs.”

On Tuesday, in explaining his program’s outbreak, Florida athletic director Scott Stricklin deduced that it, too, came from traveling last weekend. The Gators played at Texas A&M. Baylor administrators chalk up their latest outbreak to a road trip as well.

Medical experts warned over the summer that road trips would result in the spread of the virus. Without a real bubble like the NBA, college sports is left somewhat exposed. In recent interviews with SI, college football doctors and administrators have not recorded on-field transmission between teams. However, off-the-field events while on road trips are a key concern. Transportation often occurs in tight quarters—a plane or bus. Visiting locker rooms are often small. Hotel rooms and meeting spaces aren’t always large enough either.

In the SEC at least, programs are criss-crossing a group of states that rank toward the top nationally in infection rates. Arkansas, Tennessee, Mississippi, Kentucky, Missouri and Alabama rank in the top 15. For every 100,000 people, Arkansas is averaging 28 new cases per day while Alabama is at 19, according to the CDC’s seven-day rolling average.

Over the summer, SWAC commissioner Charles McClelland, in explaining his league’s decision to play a spring football season, posed a question during an interview. “When that bubble expands when other students get on campus and when it’s time to travel for games … what happens?”

Mack Rhoades is experiencing the answer. The Baylor athletic director and his staff are examining how the Bears ended up with an outbreak of 28 players and 14 staff members, with another 17 in quarantine through contact tracing. They believe the outbreak is rooted in a road trip to Morgantown for a game against West Virginia on Oct. 2.

Rhoades says everyone boarded the plane to Morgantown having tested negative. He believes that a staff member or player could have produced a false negative during testing before the trip.

“We’ve spent a lot of time looking at all of it. When we got back and tested that Sunday, we had two staff members test positive,” Rhoades says. “We’re thinking about the hotel Friday night, team meetings, position group meetings … and then the next place you focus on is the locker room. Visiting locker rooms are not necessarily spacious.”

Testing is not foolproof. Alabama, for instance, tested every day. The NFL does the same and still its teams have sustained outbreaks.

False negatives occur. Even the best PCR tests, the gold standard in the industry, may not always find viral samples in the nasal cavity, says Speights. The virus normally enters the body through the nose or mouth, he says, and then works its way down the throat into the lungs. He’s had hospitalized patients who test negative multiple days in a row before popping positive only later through fluid in their lungs.

“You can’t test your way out of a pandemic,” Speights said in an interview with SI earlier Wednesday, before Saban’s diagnosis. “These tests aren’t 100%. We hang our hat on just the test results. It’s putting all your eggs in one basket.”

Meanwhile, Saban awaits his second test result while isolating at home and, of course, working. He watched Alabama practice through a video feed on Zoom on Wednesday, even speaking to the team afterward through Zoom from his home.

In the meantime, he’s wondering aloud how this could have happened and giving a message to the general public.

“I did a good job of managing my personal space,” he says. “You have to respect this disease and the spread of this disease. My message is, adhere to protocol: wear a mask, wash your hands, social distance.”