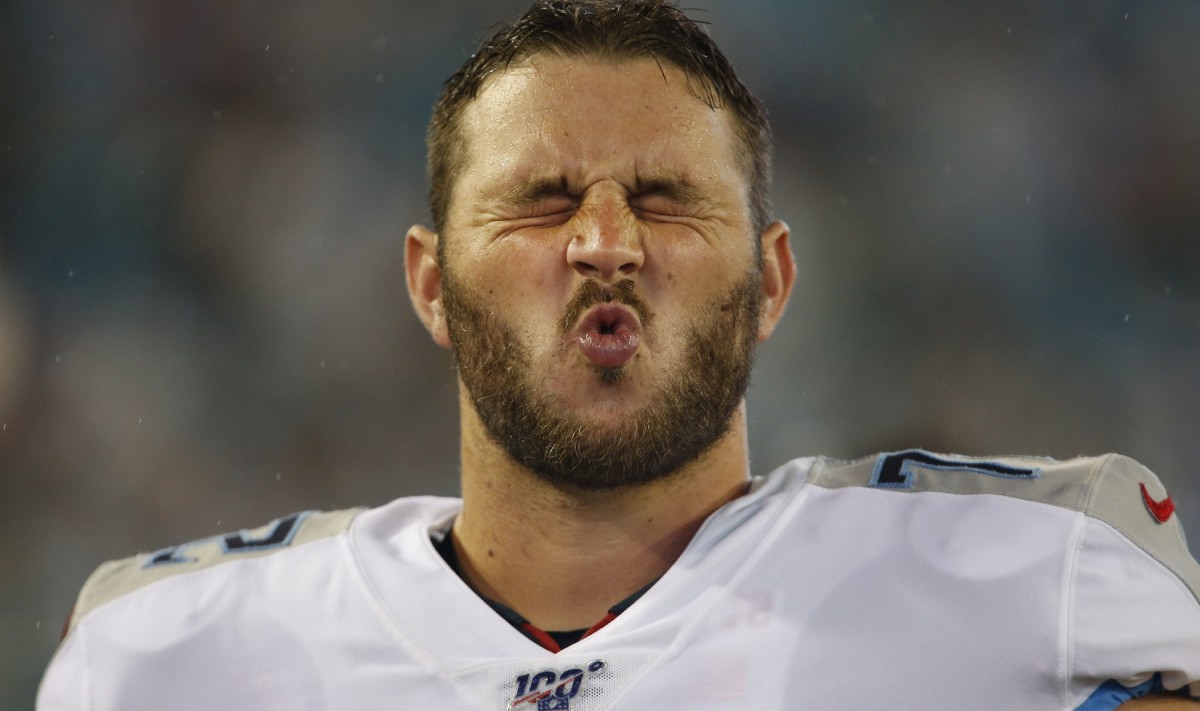 He found out while watching film at some point last week. The first family member he broke the news to was his wife because she, he said, has been around for all of his “hard days.”

Presumably not long after the Tennessee Titans placed offensive tackle Ty Sambrailo on injured reserve, David Quessenberry knew that he would have a chance to do something he hadn’t done at any point of his NFL career: start a game.

Even after he helped the Titans dominate the Colts 45-26, it was hard for the veteran offensive lineman to aptly describe the experience.

“It’s hard to put into words. It really is. It’s very special for me. It’s something I have been working for for a long time,” he said. “It’s been a huge mountain to climb … a lot of peaks and valleys along the way. Just going out there and being able to help my team win and play football with these guys is really cool.”

Quessenberry helped the Titans rush for 229 yards and four touchdowns in the victory on Sunday. Derrick Henry accounted for 178 yards and three touchdowns. Quarterback Ryan Tannehill was sacked once and had plenty of time to throw all day in his 221-yard, one-touchdown effort.

All of this comes one week after Quessenberry played 18 offensive snaps in replacement of Sambrailo in an overtime victory against the Baltimore Ravens. Quessenberry has now appeared in seven games this season.

“You know, when you’re not a starter, you might be on practice squad, wherever you may be in this league – it’s a crazy league,” he said. “I just held onto the belief that given the opportunity, I could step in and execute my job, do my assignment and, you know, help this team win and that opportunity came today. I am just proud to be able to go out there and do my job.”

Quessenberry is not your typical underdog story. His journey to this moment has included plenty of hardship and grit and a bout with cancer.

The challenges started before college. With no scholarship offers out of high school Quessenberry walked on at San Jose State University. He redshirted his freshman year in 2008 and then went on to play in 50 games with 38 starts for the Spartans. He earned an athletic scholarship in 2010 and was a team captain as a senior (2012). The Houston Texans drafted him in the sixth round of the 2013 NFL Draft.

And that’s when life threw him a pair of more devastating curveballs.

Quessenberry missed all of his rookie season after suffering a season-ending foot injury in September 2013. It only got more challenging when he felt fatigue and developed a dry, persistent cough in summer 2014. A biopsy revealed that Quessenberry had non-Hodgkin’s lymphoma, a form of cancer that originates in the lymphatic system, the body’s disease-fighting network. The Texans placed him on the non-football illness and he missed the next three seasons.

After completing his cancer treatment, Quessenberry returned to the Texans roster in the fall of 2017. He spent the better part of that season on Houston’s practice squad, but made his NFL debut in Week 15 against Pittsburgh and appeared in the Teaxans’ Week 16 game against the Colts.

The Titans added Quessenberry to the practice squad in September 2018, shortly after the Texans released him. He spent the entire season on the practice squad and stayed on it until the beginning of the 2019 season. He went on to appear in four games.

Among the highlights, in a 19-17 loss to the Colts in Week 2 of last season, the 6-foot-5, 310-pounder caught a one-yard touchdown pass from Marcus Mariota. While that was special, his most recent milestone against the Colts was even more so.

And in a time of thanksgiving, Quessenberry couldn’t be more grateful for Titans coach Mike Vrabel giving him an opportunity he has longed for.

“I’m grateful for the type of man he [Vrabel] is, for his belief in me, giving me the nod this week. He’s a really, really special coach and I’m just proud to be able to play for him and play with these guys and it really does mean a lot to me,” he said. “It’s been a long time coming and finally got the opportunity, the nod and I want to make him proud and my teammates proud. I knew that I could do it if he gave me that opportunity and it felt good.”