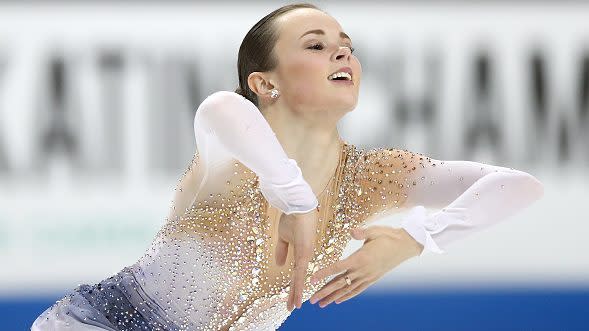 Mariah Bell topped the short program at a Skate America like no other with a clean performance in front of no ticketed spectators at Orleans Arena in Las Vegas on Friday.

Bell, 24, landed a double Axel, triple flip-triple toe loop combination and a triple Lutz for 76.48 points in front of cardboard cutouts of fans.

“I kind of had to go back to revert to what it’s like to practice,” Bell said on NBCSN. “We could hear clapping and stuff, but you look up, and the stands are completely empty.”

She edged 2018 U.S. Olympian and national champion Bradie Tennell by 3.19 points. Tennell had the back half of her triple Lutz-triple toe combination called under-rotated.

Audrey Shin, the 16-year-old, 2019 U.S. junior silver medalist who failed to qualify for last season’s senior nationals, is a surprising third at 69.77.