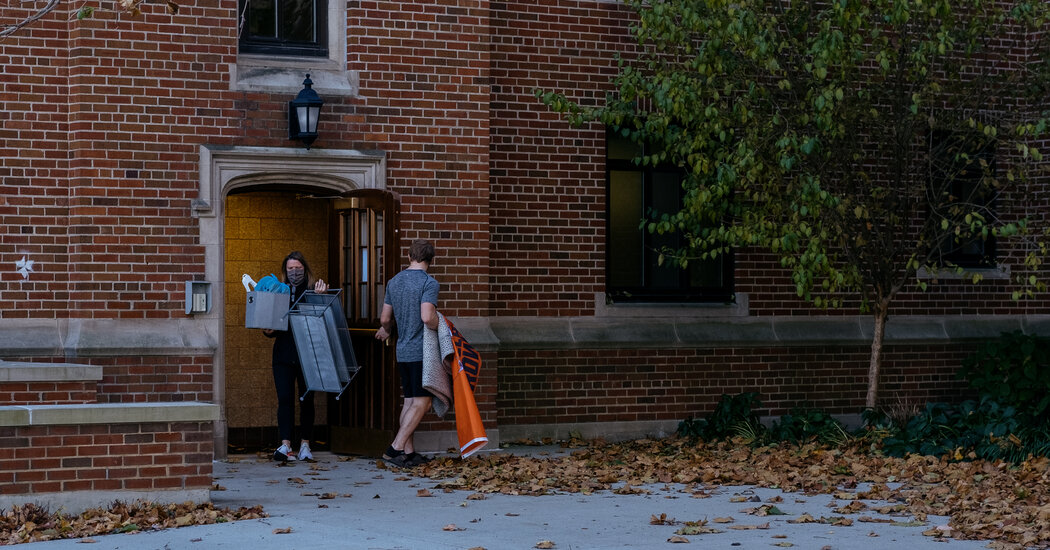 The University of Michigan’s flagship campus in Ann Arbor opened the fall semester with great expectations. Thousands of students were welcomed back to the dorms in August.

Pessimists were asked to reserve judgment. Parents worried that students would not be safe.

Sure enough, by midsemester, coronavirus clusters were erupting on and off campus. In October, county health authorities ordered the whole campus to shelter in place, citing “social gatherings” on or near campus as a major source of infections.

Now, after more than 2,540 Covid-19 cases among students and staff, the university is shifting course drastically. It has asked students not to come back to campus in January unless they have to. Instruction will be remote in 90 percent of classes. Students who violate certain health rules will face tougher sanctions, including automatic probation, and coronavirus tests will be mandatory for anyone coming to campus.

In many ways, the school’s 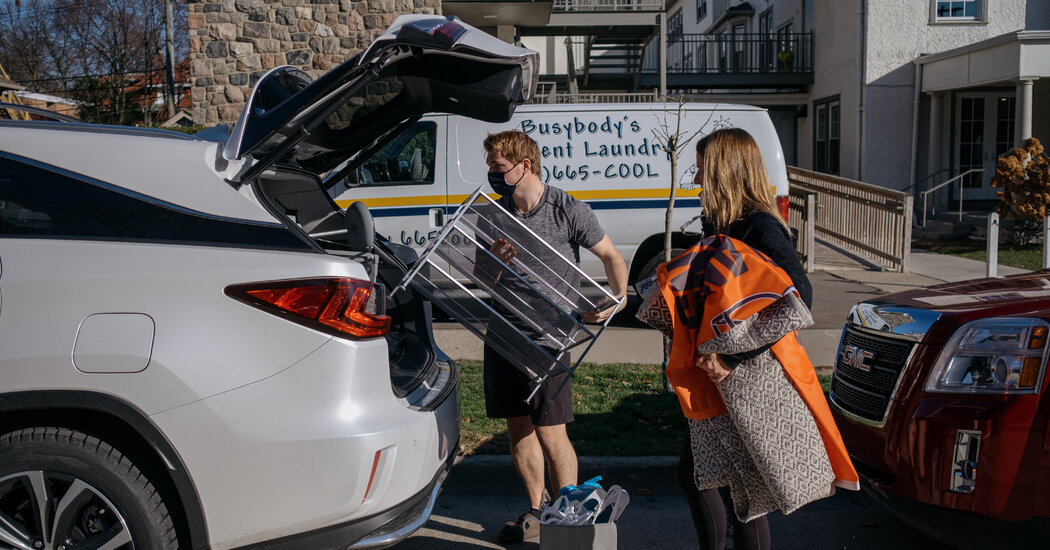 Dr. Schlissel still talks about testing as just one key tool in a combination of actions necessary to control the virus, but he has come around, he said, to seeing its importance in “reassuring” the community. When classes resume in 2021, the university will de-densify the dorms and ramp up testing. Only about 3,000 students will be allowed back into university housing, and anyone who comes onto campus, symptomatic or not, will have to be cleared via a saliva-based test processed by a faculty-founded start-up in Ann Arbor.

The retrenchment has pleased faculty but upset undergraduates and their parents. More than 1,500 angry parents have signed a petition protesting the short notice with which the university canceled spring housing contracts. If the university doesn’t “reverse its drastic decision to close the dorms,” it says, the parents want a discount.

No. 22 Texas at Kansas was among six games postponed Wednesday by COVID-19 problems as the virus took another chunk out of this weekend’s major college football schedule.

Overall, 14 out of 62 games involving Bowl Subdivision teams scheduled for this week have been called off. Last week, 15 of the 59 games scheduled were not played.

Texas-Kansas was just the second Big 12 conference game to be postponed this season and was rescheduled for Dec. 12.

The American Athletic Conference had to call off Navy at South Florida and Houston at SMU. The conference will work to reschedule those games.

Ukraine risks forfeiting the game as a 3-0 loss for failing to ensure replacement players were available. The squad had been hit with virus cases before arriving in Switzerland.

It’s the latest development with the virus for the team, which previously placed offensive lineman Chris Hubbard and fullback Andy Janovich on the list and had a staffer test positive for the novel coronavirus last week.

The NFL created the list for players who have either tested positive for COVID-19 or have been quarantined after having been in close contact with an infected person.

The Browns have had to close their facility twice in the past six days to do contact tracing after receiving results of a positive test.

Conklin signed with Cleveland as a free agent in 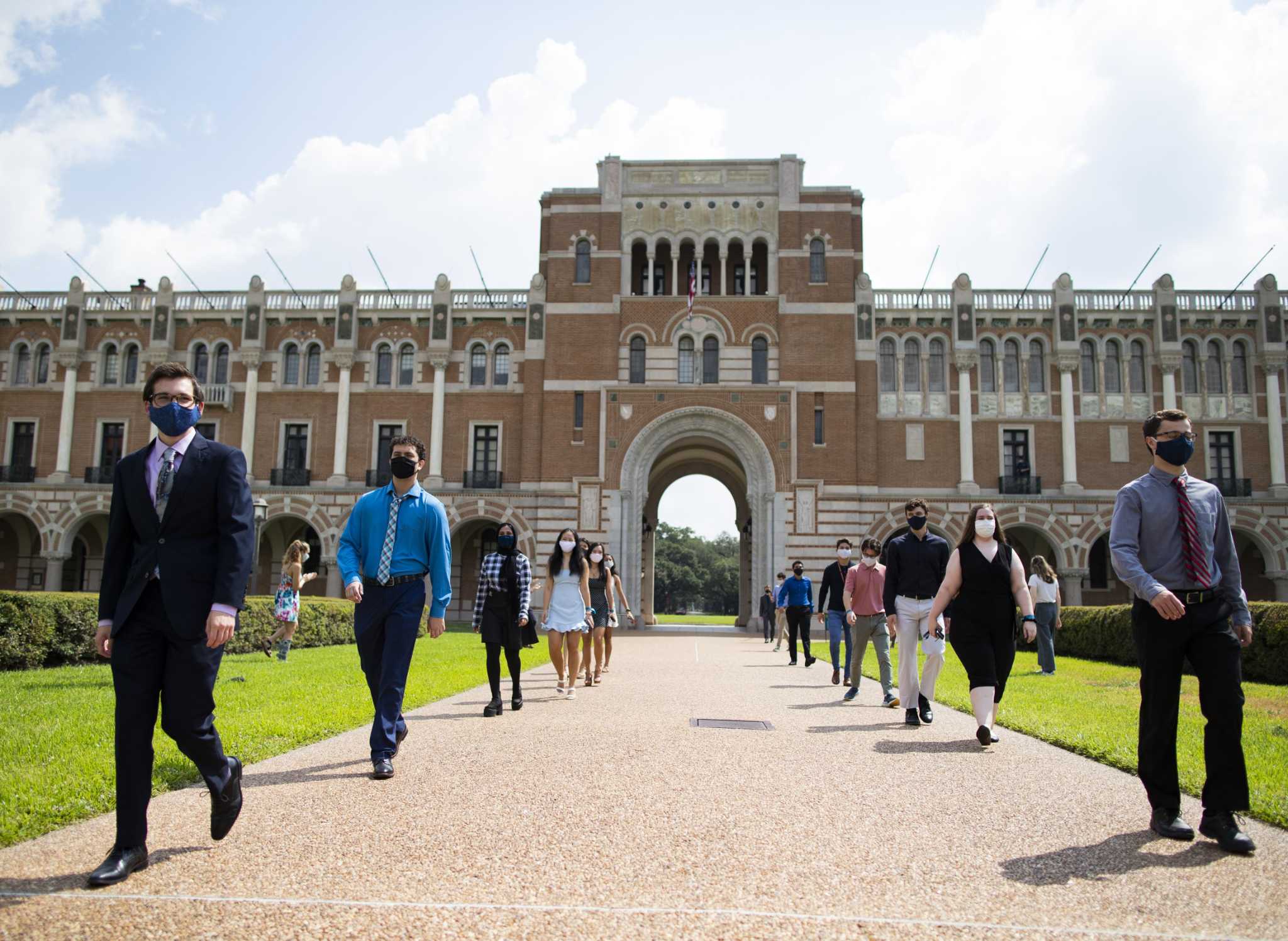 When COVID-19 cases began to spike across Houston, Rice University came up with an innovative way to stem the spread of the virus across campus.  Before students could return to campus this semester, they had to sign a list of regulations and rules to honor called the Culture of Care Agreement.

“The vast majority of people who we see generally didn’t realize that they did something wrong. There’s a genuine apology, like ‘I’m not doing that again. I won’t do that going

CAPE CANAVERAL, Fla. (AP) — SpaceX aimed for a Sunday night launch of four astronauts to the International Space Station, although the prospects of good weather were just 50-50 and its leader was sidelined by COVID-19.

Vice President Mike Pence was expected at NASA’s Kennedy Space Center for the long-awaited start of regular crew rotations aboard privately owned and operated capsules. It also marked only the second time in nearly a decade that astronauts were set to rocket into orbit from the U.S.

As nearby towns braced for an onslaught of spectators, SpaceX founder and chief executive Elon Musk disclosed via Twitter that he “most likely” has a moderate case of coronavirus, despite mixed test results.

NASA policy is that anyone testing positive for the virus to quarantine and remain isolated.

CAPE CANAVERAL, Fla. (AP) — SpaceX chief Elon Musk may have to steer clear of NASA’s Kennedy Space Center after getting mixed COVID-19 test results on the eve of his company’s second crew launch.

Musk took to Twitter on Friday to say he tested positive for coronavirus, then negative twice, then positive again. He said he wasn’t feeling too well the past few days — sniffles, cough, low fever — but currently had no symptoms.

“So ‘Elon Musk Tests Negative for Covid’ is an equally correct title,” he tweeted.

Musk said his first tests were rapid tests, and he was awaiting the results of lab tests. The 15-minute rapid tests are less sensitive than the lab tests, which taken longer to process.

At a news conference, NASA Administrator Jim Bridenstine said he expects SpaceX “to do any contact tracing that is appropriate.” He stressed it is NASA policy that anyone 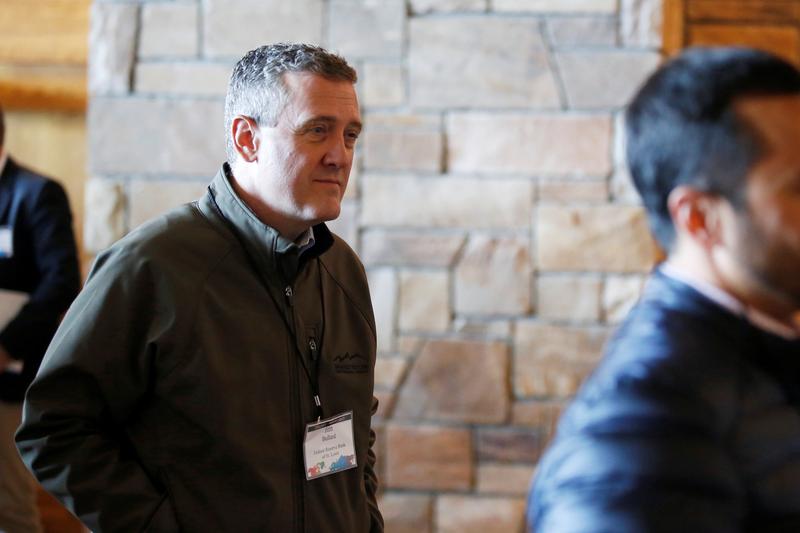 WASHINGTON (Reuters) – The coronavirus may be spreading faster now “at the household level” rather than in business settings, and a new U.S. push for changes in personal behavior may be needed to control it, St. Louis Fed President James Bullard said on Friday.

With case growth hitting records and death rates and hospitalizations rising, Bullard noted that since restrictions on many commercial activities remain in place, “it may be that renewed increases in infections are coming more from personal interactions at the household level.”

If so, “a renewed public education initiative asking households to take actions to reduce disease transmission may be helpful”, Bullard said in webcast remarks to the Economic Club of Memphis.

In his prepared remarks