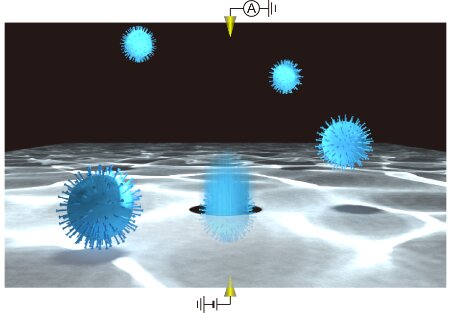 The ongoing global pandemic has created an urgent need for rapid tests that can diagnose the presence of the SARS-CoV-2 virus, the pathogen that causes COVID-19, and distinguish it from other respiratory viruses. Now, researchers from Japan have demonstrated a new system for single-virion identification of common respiratory pathogens using a machine learning algorithm trained on changes in current across silicon nanopores. This work may lead to fast and accurate screening tests for diseases like COVID-19 and influenza.

In a study published this month in ACS Sensors scientists at Osaka University have introduced a new system using silicon nanopores sensitive enough to detect even a single virus particle when coupled with a machine learning algorithm.

In this method, a silicon nitride layer just 50 nm thick suspended on a silicon wafer has tiny nanopores added, which are themselves only


The US Department of Defense study supports earlier research showing the ventilation systems on aircraft filter the air efficiently and take out particles that could transmit viruses.

The study, which was released without peer review, did not take into account other ways that people could catch the virus on aircraft — including from others coughing or breathing directly on them, from surfaces or from confined spaces such as restrooms.

The US Transportation Command, The Defense